You are here:
Founder ProjectOthers

Jakarta,  February 2017
“The more You give, the more You get.” That is one of the moral message from masterpeace Garin Nugroho, famous Director of Mooncake Story Movie. The role of Bunga Citra Lestari-BCL Famous Top Indonesia artist, acts as Asih, she is  a Jocky “3 in 1” in the movie. Her roles attracts audience so much while really heart-touching the audience at the same time.

Asih who works on odd jobs as a washerwoman is a figurethat hold the principle of life about dignity firmly though she must strive in poverty among the sparkling city of Jakarta. Even though She looks beautiful, she choose a tough path by striving and drudging to make living of her child and sister.

While on the other hand, the actor Morgan Oey who plays David who defines the meaning of life by giving thanks, even though buffeted by the storms in life. The unfortinate death of his wife not yet over, he then convicted by doctor had encounteredalzheimer’s disease. A disease that leads to death, preceded by the loss of memory. As a person who  blessed with wealth since long time ago,  David then try to define the meaning of life during his rest of life by sharing to others who really need for help.

Finally, the “Mooncake Story Movie” is a masterpiece from Tahir Foundation by cooperating with MVP Pictures could be a portrait of life that inspires about how important to civilize “the culture of giving”in the harmony of living throughout national and state within the framework of Republic of Indonesia without discrimination of Ethnic, Religion, Race and Inter-Group. The Poor even though in the midst of difficulties will keep striving with honorable way and stand still to face the life. While the Rich defines all the disasters by giving thanks in a way to give and share with others. That is the philosophy of “Mooncake Story, a Movie starred by BCL, Morgan Oey, Deddy Sutomo, Melati Zein, Jaja Miharja and Dominique Diyose. It is also packed smoothly as smooth as silk by Director, Garin Nugroho which will start attracting public attentions on March 23, 2017. 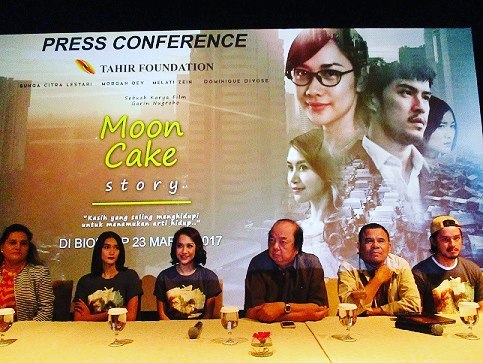